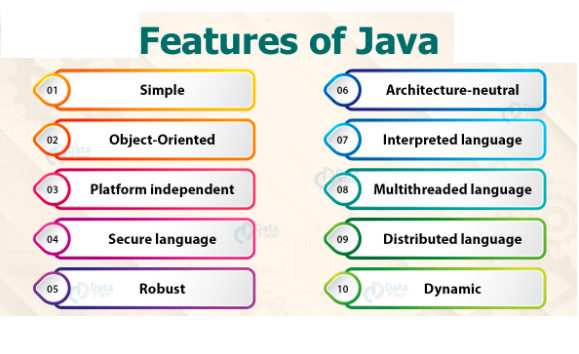 JAVA is a general purpose , object oriented programming language developed by Sun Microsystems of USA in 1991. Originally called oak by Jamesh Goslins ( one of the inventors of the languge. Java was designed for the development of software for computer electronic devices like TV, VCRs, tosters and many other electronic devices.

Java ensures portability in two ways. First java compiler generates the byte code instructions that can be implemented on any machine. Secondly the size of the primitive data types are machine independent.

Java is a true object oriented language. Almost everything in java is an object. All program code and data reside with object and classes. Java comes with an extensive sets of classes , arranged in packages that we can use in our programs by inheritance.

Security becomes one of the most important issue for a programming language that is used over internet. Threat of viruses and abuse of resources are everywhere. Java systems not only verify all memory access but also ensure that no viruses are communicated with an applet. The absence of pointers in java ensures that programs cannot gain access to memory locations without proper authorization.

Java programs support functions written in other languages such as c / c ++. These functions are known as native methods.

Java is a lot like C but the major difference between java and C is that Java is an Object Oriented Language and has mechanisms to define classes and objects where as Language C is procedure Oriented. Java Team did not include some of the features of C in Java to make it simple and safe :

Java and c Plus Plus

Java is a true object oriented language while C ++ is basically C with object oriented extension. That is what the increment operator indicates. C ++ has maintained the drawback compatibility with C . Listed below are some major C Plus Plus features that were intentionally omitted from Java

The Java Development Kit comes with a collection of tools used for developing and running Java Programs. They include :

The Java Standard Library or ( API ) includes hundreds of classes and methods grouped into several functional packages. Most commonly used packages are :

Java is a general purpose , object oriented programing language. We can develop to types of java programs :

Stand Alone applications are programs written in Java to carry out certain tasks on a stand alone local computer. Java can be used to develop programs for all kinds of application, which earlier were developed using languages like c and c Plus plus.

Applets are small java programs developed for Internet applications. An applet located on distant computer ( server ) can downloaded via internet and executed on local computer ( Client ) using a java capable browser. We can develop applets for doing anything from simple animated graphics to complex games and untilities. Since applets are embedded in an HTML ( Hyper Text Mark Up Language ) document and run inside a web page, creating and running applets are more complex than creating an application.

Stand alone programs can read and write files and perform specific certain operations that applets cannot do. An applet can only run with in a web browser.

System.out.println(“ Java is better than  C Plus Plus “);

Declare a class which is an object oriented construct. Java is a true object oriented language and therefore everything must be placed inside a class . class is a keyword and declares that a new class definition follows. Sampleone is a java identifier that specifies the name of the class to be defined.

Every class in java begins with an opening brace “{“ and ends with an matching closing brace “}”appearing in the last line in the example.

Public : The keyword public is an acces specifier that declares the main method as unprotected and there fore making it accessible to the other classes . This is similar to the C ++ public modifier.

Static : Next appears the keyword static which declares this method as one that belongs to the entire class and not a part if any objects of the class. The main must always be declared as static since the interpreter uses this method before any objects are created.

Void : The type modifier void states that the main method does not return any value .

The only executable statement in the rogram is

Since java us a true object oriented language , every method must be a part of an object. The println method is a member of the out object, which is static data member of System class. The line prints the string

Java is better than C ++

Use of math functions

The purpose of this statement is to instruct the interpreter to load the Math class from the package lang. ( This language is similar to inclue language in C ) . Math class contain the sqrt method required in the program.

An application with two classes

void getdata( float a , float b)

A java program is basically a collection of classes. A class is defined by a set of declaration statements and methods containing executable statements. Smallest individual units in a program are known as tokens. The compiler recognizes them for building up expressions and statements. Java language includes fine types of tokens:

Literals : Literals in java are sequence of characters ( digits , letters and other characters) that represent constant values to be stored in variables. Java specifies five major types of literals :

Implementation of a java application program involves a series of steps. They include :

System.out.println(welcome to the world of java “);

We must save this program file as test.java ensuring that the file name contains the class name properly. This file is calles the source file . note that all java source files will have the extension java. Note that if a program contains multiple classes, the file name must be the classname of the class containing the main method.

Compiling the program : to compile the program we must run the java compiler javac, with the name of the source file on the command line as shown

If everything is okay, the javac compiler creates a file called test.class containing the bytecodes of the program. Note that the compiler automatically names the bytecode file as

We need to use the java interpreter to run a stand alone program. At the command promt, type

Now, the interpreter looks for the main method in the program and begins execution from there . When executed , our program displays the following :

Welcome to the world of java